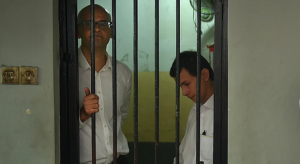 August 14, 2015 – Indonesia today freed two teachers who had been jailed for sexually abusing students at an international school in a case critics say was fraught with irregularities and put the country’s justice system under the spotlight.

Canadian teacher Neil Bantleman and Indonesian teaching assistant Ferdinand Tjiong were found guilty in April of abusing kindergarten students at the Jakarta Intercultural School (JIS). They had been sentenced to 10 years in prison and fined 100 million rupiah (US$7,600).

“The truth has finally come out,” a tearful Neil Bantleman announced before kissing his wife upon his release from an East Jakarta prison, where he and Tjiong were met by dozens of cheering family members and supporters.

Earlier today, the pair’s lawyer, Hotman Paris Hutapea, revealed that their sentence had been overturned by a higher court citing a lack of proof of wrongdoing.

“The previous verdict has been overturned by the Jakarta high court because there was no evidence of sodomy,” Hutapea told reporters, amid cheers from the teachers’ families and supporters.

The decision comes on the heels of the rejection by a Jakarta court of a related multi-million dollar civil lawsuit against the school, that was also thrown out due to a lack of evidence.

The two cases had triggered concerns about the justice system in Indonesia, with observers criticising the investigation as being flawed and the criminal trial for a lack of transparency.

The cases have been closely watched by expatriates and diplomats in Jakarta, many of whom send their children to the U.S.-embassy backed school.