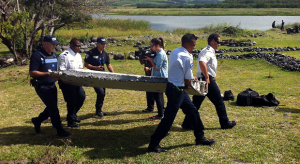 August 7, 2015 – France has said it would launch new searches by air, land and sea from Reunion in the hopes of finding more wreckage from MH370, after Malaysia said a wing part that washed up on the Indian Ocean island came from the ill-fated flight.

A Casa military aircraft will begin surveying the area from this morning, the French government said in a statement.

The search will also be stepped up with foot patrols, helicopters and maritime units, it added.

“Any discovery will be immediately made available to the investigation,” said the joint statement by the French ministers of defence, transport and overseas territories yesterday.

Separately, local authorities for the island district where the first piece of debris was found said they would organise a thorough search for other parts from the plane starting Monday.

The renewed efforts to hunt for MH370 wreckage came after Malaysian Prime Minister Najib Razak announced that a two-metre-long wing part that was discovered on French Reunion island last week was confirmed as coming from the missing aircraft, the first physical proof it met a tragic end in the Indian Ocean 17 months ago.

“It is with a very heavy heart that I must tell you that an international team of experts has conclusively confirmed that the aircraft debris found on Reunion island is indeed from MH370,” Najib said earlier yesterday.

But the announcement was not universally welcomed by the relatives of those on board, with some relatives of the 239 people on board expressing scepticism and voicing fresh criticism of officials’ handling of the disaster.

The search for MH370 turned into one of the biggest mysteries in the history of aviation, sparking a colossal hunt in the Indian Ocean based on satellite data which hinted at MH370’s possible path.

Malaysia Airlines described confirmation that the wing part came from MH370 as a “major breakthrough” that it said would hopefully help to find the plane somewhere in the depths of the Indian Ocean.

Australian authorities, who have led a multinational search for the aircraft, expressed confidence that they were searching in the right area and that the body of the plane would eventually be found.

“It suggests that for the first time we might be a little bit closer to solving this baffling mystery,” Australian Prime Minister Tony Abbott said.