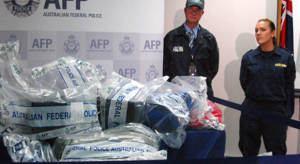 August 25, 2015 – Australian police today said 70 kilogrammes (154 pounds) of cocaine worth US$12.6 million has been seized from a yacht, as they crack down on syndicates trafficking drugs through the South Pacific.

Five people, including a Briton and an Estonian, were arrested and remanded in custody over the haul, believed to be one of the largest cocaine seizures in Queensland state history, Australian Federal Police said.

“We believe this operation has disrupted and caused significant damage to a number of organised criminal enterprises that are seeking to profit from the high prices and demand for illegal narcotics in Australia,” said Federal Police organised crime commander David Stewart.

Police said they were tipped off about a possible drug shipment by the British National Crime Agency, which suggested a yacht was making its way to Australia from South America. Authorities monitored the vessel as it sailed from the Pacific state of Vanuatu and arrived at Queensland’s popular Gold Coast tourist strip yesterday.

Police alleged that on arrival the yacht’s only occupant, a 43-year-old Estonian, met a 58-year-old Briton and the pair purchased tools to remove the drugs that were hidden inside the body of the vessel.

They were arrested, along with three other men they met, on Monday afternoon with some 40 kilograms of cocaine in their possession, police alleged. A further 30 kilograms of the drug was later found concealed within the yacht, police said, with the total consignment worth about US$12.6 million (A$17.5 million).