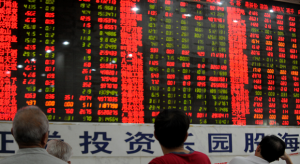 The benchmark Shanghai Composite Index fell late in the day after spending most of the afternoon in positive territory. It closed down 1.3% at 2,927.29 on heavy selling of steelmakers and other heavy industrials.

Elsewhere in Asia, Australian shares gained 0.7% to 5,172.80, helped by buying of resource-related shares. Shares also rose in Taiwan but fell in New Zealand and most Southeast Asian markets.

Many in Asia went to bed last night smiling over China’s decision to slash its key interest rate, only to awaken to yet another decline overnight on Wall Street.

All of a sudden, China and the performance of the Chinese markets have now taken the lead in determining daily direction for trading in stocks worldwide.  Meanwhile, investors unable to meet margin calls are being forced to sell, regardless of the Chinese central bank’s decision.

With confidence in the markets completely shattered, the likelihood of buyers meeting these intermittent bouts of forced selling may just be few and far in-between.

Markets have been zigzagging for weeks on deepening unease over the ramifications of slowing growth in China, the world’s second-largest economy and the driver of much of the global growth of the past decade.

The apparent inability of Chinese regulators to stabilize the markets, has spooked investors already fretting over when the U.S. Federal Reserve will raise interest rates.

Asia got a slow start following a last-minute sell-off that dragged the Dow Jones industrial average down 204.91 points, or 1.3%, on Tuesday to 15,666.44. That extended Wall Street’s losing streak to six days, the longest such stretch in more than three years.

The Dow had surged more than 400 points after China cut its interest rates for the fifth time in nine months in a renewed effort to shore up growth. The central bank also increased the amount of money available for lending by reducing the reserves banks are required to hold.

The People’s Bank of China acted after the Shanghai stock index slumped 7.6% on Tuesday, on top of an 8.5% loss on Monday.

China’s slowdown is crimping demand for oil and other commodities, a ripple effect that already is slowing exports and other business activity across Asia.

Beyond China, traders are waiting for clarity from the Federal Reserve, which has signaled it could begin raising its key interest rate from near zero for the first time in nearly a decade as early as this year. The Fed isn’t expected to deliver a policy update until it wraps up a meeting of policymakers in mid-September.