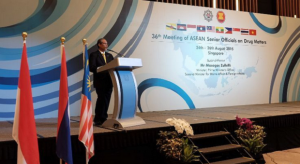 Speaking at the opening ceremony of the 36th ASEAN Senior Officials’ Meeting on Drug Matters, Mr Masagos said the UN General Assembly’s special session on the world drug problem will be a platform for countries to gather and take stock of the global fight against drugs, and chart a plan of action to tackle the world drug problem.

But some countries and states had already “given up the fight”, and have begun not only decriminalising or legalising drug consumption, but also advocating for other countries to adopt the same approach, he said.

“As members of the ASEAN community, while we respect every country to have the sovereign right and responsibility to decide on how best to approach the drug problem, we also must respect the decision of those who choose not to have the liberal approach towards drugs, and who choose to stand firm, to stand together, to say that this approach is not for us,” the minister said.

Mr Masagos, who is also Second Minister for Home Affairs and Foreign Affairs, stressed the need for a “clear statement” from ASEAN as the only regional bloc that has maintained a drug-free focus in its policies.

“I hope that this statement will send a message to all our citizens and to the international community that we continue to reject the scourge of drugs, and that we do not condone its presence in our societies. We want our children, our youth to be free and safe on the streets, and that we as parents do not worry that they will meet a drug peddler, a drug abuser, who will also want them to be one,” he said.

Mr Masagos cited the 2014 World Drug Report by the UN Office on Drugs and Crime, which cautioned that liberal drug policies reduce the perception of harm in drug use, and this could in turn result in their increased use especially by the younger generation.

Mr Masagos added that a unified stand would also send a strong message to international drug syndicates that ASEAN will continue to work together to disrupt their activities. He noted that such syndicates have formed networks within Southeast Asia to manufacture, receive and distribute drugs to the region, adapting to the enforcement strategies of authorities while making use of technologies such as the DarkWeb and Bitcoin to avoid enforcement.

In his keynote address, Deputy Secretary-General of ASEAN’s Political Security Community Department VP Hirubalan said that closer ASEAN integration of economies, trade and transport could also contribute to difficulties in combating the drug problem in the region, aiding the cross-border movement of drugs.

“I do not know how strong the causal relationship is between ASEAN integration and the drug problem,” said Mr Hirubalan. “But it is incumbent on us to find solutions. Integration is for the larger good of our people and our region.”