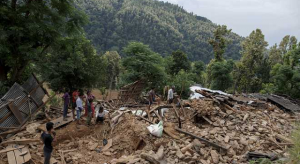 August 28, 2015 – Landslides triggered by heavy rainfall killed at least five people in central Nepal, four of them in a shelter for survivors of a devastating earthquake, police said today.

Rescuers in Nepal’s Nuwakot district are still searching for a nine-year-old boy missing since an overnight landslide crushed two bamboo and tin shelters built for families displaced by the April 25 quake.

“The landslide occurred around 2.00am, burying the shelters while the victims were sleeping inside,” said district police chief Siddhi Bikram Shah. “We have recovered four bodies and have been searching for the missing boy since early morning,” Shah said.

Six quake victims injured in the accident have been taken to hospitals in Nuwakot and neighbouring Kathmandu for treatment, he said.

In a separate incident, an 80-year-old woman died when a landslide slammed into her house in Nuwakot, he said.

Scores of people die from flooding and mudslides during the annual monsoon season in Nepal.

Experts warn that the Himalayan nation could see more landslides this year after the 7.8-magnitude quake.

More than three dozen people lost their lives last month in multiple landslides in western and southern Nepal, including a student who died when mud and rocks buried his school.

Another 35 people were killed in June when a landslide smashed into villages in northeast Nepal.