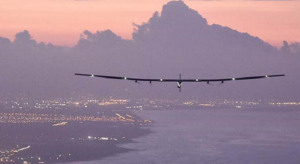 July 7, 2015 – Endeavoring to reach Hawaii from Japan to encourage the use of clean technologies, the solar-powered aircraft of Bertrand Piccard and André Borschberg has successfully completed the longest leg of the Solar Impulse’s round the world mission.

The international aeronautic record sanctioning organization, the Fédération Aéronautique Internationale (FAI), has ratified the flight as the longest solo record for a zero-fuel aircraft.
At the controls of Solar Impulse 2, André Borschberg landed safely in Kalaeloa, Hawaii, on July 3, 2015, at 5:55am local time, after a perilous non-stop flight of 5 days and nights (117 hours, 52 minutes). Waiting for sunrise to land, the airplane flew a distance of 7,212km at an average ground speed of 61.19km/h on this eighth leg of its journey. The team spent the past two months in Japan until weather allowed the flight, which began in Abu Dhabi, to continue.
The next leg will be a non-stop flight to Phoenix, with Bertrand Piccard at the controls.
Piccard wrote on the team’s website, “What André has achieved is extraordinary from the perspective of a pilot. But furthermore, he has also led the technical team during the construction of this revolutionary prototype. This oceanic flight to Hawaii demonstrates that if technological solutions exist to fly a plane day and night without fuel, then there is potential for these same efficient technologies to be used in our daily lives, and to achieve energy savings to reduce CO2 emissions.
Borschberg said after his flight, “I feel exhilarated by this extraordinary journey. I have climbed the equivalent altitude of Mount Everest five times without much rest. The team at the Mission Control Center in Monaco was my eyes and my ears… The MCC was battling to give me the possibility to rest and recover, but also maximizing the aircraft’s energy levels and sending me trajectories and flight strategies simulated by computer. This successfully validates the vision that my partner Bertrand Piccard had after his round-the-world balloon flight to reach unlimited endurance in an airplane without fuel.”