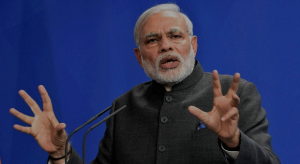 July 13, 2015 – Indian Prime Minister Narendra Modi, visited the Kyrgyz-India Mountain Biomedical Research Centre (KIMBMRC) at Bishkek. He was briefed by scientists there on the activities at the Centre.

The Prime Minister electronically unveiled a plaque commemorating the inauguration of the extreme high altitude test laboratory – Phase 2 of the KIMBMRC project – situated in the Syok Pass at an altitude of 4000 metres. The laboratory will be constructed later this year.
The Prime Minister interacted with Indian and Kyrgyz soldiers at the Too Ashu laboratory which is part of the ongoing Phase 1 of the project.
The Prime Minister said that the research done at this Centre will greatly benefit the health of soldiers who secure the borders at high altitude.
The Prime Minister inaugurated the first telemedicine link between India and Central Asia. He witnessed a tele-consultation for a cardiac patient between doctors in Osh city in Southern Kyrgyzstan, with doctors in Bishkek and with the Apollo hospital and AIIMS in Delhi.