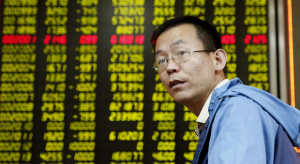 In the most drastic step yet to prop up the market, China’s securities regulator banned shareholders with large stakes in listed firms from selling stake for the next six months. The banking regulator said separately that it would allow lenders to roll over loans backed by stocks too.

By the end of trading, the CSI300 index of the largest listed companies in Shanghai and Shenzhen had raced up 6.4%, while the Shanghai Composite Index bounced 5.8% for its biggest daily percentage gain in six years.

China’s malfunctioning stock markets remained semi-frozen, however, with the shares of around 1,500 listed companies, or around $2.8 trillion of stock, suspended, and some analysts said it was too early to call the endgame.

“The market sees some positive signs today,” said Du Changchun, analyst at Northeast Securities in Shanghai. “But it is far from calling it a victory for the rescuers as more than half of listed companies are not trading.”

More than 30% has been knocked off the value of Chinese shares since mid-June, and for some global investors the fear that China’s market turmoil will destabilise the financial system is now a bigger risk than the crisis in Greece.

“We are inclined to believe that Beijing will escalate policy responses until they start working,” said economists at Credit Suisse in a research note.

“If market conditions do not stabilize, we expect a statement of ‘whatever it takes’ from the Chinese government, given that social stability is at stake and financial systemic
risks are evident.”

The United States has also voiced worries the stock market crash could get in the way of Beijing’s economic reform agenda.