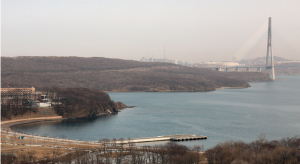 June 2, 2015 – One of Japan’s largest residential development companies is prepared to build a large resort complex on an island in Russia’s Far East, Kommersant reported, as neighboring Asian countries increasingly move to invest in the underdeveloped region.

The resort on Russky Island near the far eastern city of Vladivostok would include a residential complex and a resort with a golf course for summer vacationers and mountain skiing area for the winter season, Sergei Kachayev, a deputy minister for the development of the Far East, told Kommersant.

An unidentified source said that the Japanese firm, Iida Group Holdings, is prepared to invest between $380 million and $450 million in the new resort, with plans to recoup their capital in five to seven years.

The island, which has served as a military base since the tsarist era, became more accessible following the construction of a bridge connecting it to the mainland for the Asia-Pacific Economic Cooperation (APEC) summit in 2012.

A spokesperson for the office of the Primorye region governor confirmed that negotiations with Iida Group Holdings were ongoing, Kommersant reported. Kommersant was unable to receive confirmation from Iida, but earlier this May the Japanese company announced that it was opening an office in Russia.

The Primorye region, a lush mountain-meets-beach territory on the Pacific Ocean, has recently become a focal point for Asian investment.

In January the regional government announced that it had signed investment deals worth $1.4 billion with a number of Asian investors to build a gambling zone near Vladivostok. The gaming zone, which has an estimated price tag of $2.2 billion, will boast 16 hotel-casino complexes and a yacht club, news agency RIA Novosti reported.

China is also looking to get in the game. In May a Chinese official from a region bordering Russia proposed that the countries work together to develop a high-speed railway from China to Vladivostok, a project that, if executed, would join a range of other tourism and business projects under way between the two countries.