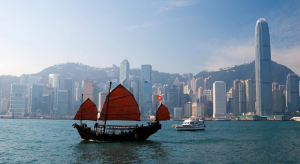 The overnight raids involving scores of officers came three days after police warned they were monitoring on-line activity to track anyone planning to incite violence. Dozens were on patrol on Monday near government headquarters, where metal fences have been erected, before debate on the package begins on Wednesday.

The nine were arrested on suspicion of conspiracy to manufacture explosives, police said.

Posts on social media were quick to question the timing of the raids, details of which were leaked to Hong Kong media. When asked to name the group and detail the aims of the conspiracy, Superintendent Au Chin-Chau said police were looking at all lines of inquiry.

“During the operation, police found chemicals, computers, leaflets, some maps … face masks, thinner and some air rifles and a tablet computer with explosive installation instructions and the chemical formula of making smoke grenades,” he said.

The former British colony, which returned to China in 1997, is gearing up for a contentious vote on how to choose its next leader in 2017. China’s Communist Party rulers have proposed a direct vote, but only pre-screened, pro-Beijing candidates will be allowed to stand. Protesters say the proposal makes a sham of universal suffrage, which had been promised as an eventual goal.

A weekend poll showed public support has shifted against the package amid renewed street marches by pro-democracy protesters.

But senior Chinese officials are expressing confidence behind the scenes that Hong Kong will still pass the package, paving the way for more potentially crippling protests in the Asian financial centre.

The Independent Commission Against Corruption said in a statement it was investigating allegations by an unnamed legislator concerning the offering of a bribe for him to vote for the political reform package. No other details were immediately available.

Tensions are already rising again in the city, where radical group Hong Kong Indigenous urged supporters on Sunday to protest near where the funeral of Beijing loyalist Yeung Kwong, one of the leaders of deadly anti-British riots in 1967, was held at the weekend.

Police are taking no chances following sometimes violent clashes during demonstrations against the package. More than 100,000 people took to the streets at the height of protests last year, bringing key areas of the city to a standstill. Only a few thousand turned out for yesterday’s rally.

Senior Superintendent Brian Lowcock said more than 100 police were involved in the raids.

Polls taken before and after a televised weekend debate between three democratic lawmakers and three Beijing loyalists showed many viewers turned against the government’s proposal after hearing both sides’ arguments, Hong Kong media reported.

Before the debate, 49 per cent of 188 people at the forum believed lawmakers should veto the proposal, while 42 per cent supported it.

After the debate, 54 per cent said the package should be voted down, with 38 per cent voicing support.

Pro-democracy activists plan to hold evening rallies outside government headquarters before the package goes up for debate, with a vote expected by the end of the week.

Beijing has pressured the city’s pro-democracy lawmakers to back the electoral blueprint. The deal requires two-thirds of the 70-seat house, or 47 votes, to pass.

Some 27 pro-democracy legislators have vowed to veto the deal and said that any optimism from senior Chinese officials is a last-ditch effort to unnerve them.

Britain handed Hong Kong back to China under a promise that core personal, social and commercial freedoms, backed by a British-style legal system, would be protected for 50 years.

Anti-Beijing sentiment is rising in Hong Kong, where football fans jeered the playing of the Chinese national anthem during a World Cup qualifying match against Bhutan last