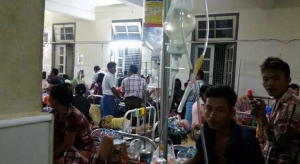 June 10, 2015 – Three hundred people have been hospitalised over the past week in the Tenasserim Division town of Mergui, also known as Myeik, amid an outbreak of dengue fever.  The majority of the patients were young children.

“The outbreak began about two weeks ago and nearly the whole town has been affected by it. The hospital is crowded with patients, most of whom are children, from a few months to ten-year-olds,” said Tin Ko Ko-Oo.

A doctor at Mergui hospital confirmed that the current spate exceeds the levels of normal seasonal outbreaks – exacerbated in monsoon season due to poorly maintained and frequently blocked drains, leaving the town’s hospital struggling to cope.

Residents spoke of a shortage of medical staff, saying that hospital workers had barely had any rest over the past week.

Dengue fever is a mosquito-borne disease that causes flu-like symptoms, affecting millions of people every year, predominately in tropical and sub-tropical regions.