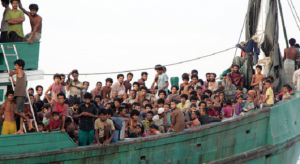 May 20, 2015 – A migrant boat found off the coast of Indonesia’s Aceh with hundreds of Rohingya on board is a vessel that went missing more than three days ago after being spotted off Thailand.

Hundreds of men, women and children were found pleading for help last week on the drifting trawler, which has become emblematic of Southeast Asia’s growing migrant crisis and the region’s reluctance to offer sanctuary to the passengers.

The Thai authorities turned the boat away from Thai waters, insisting it wanted to travel to Malaysia. Fears had been growing for those on board after contact was lost with the vessel late on Saturday.

Indonesian fisherman rescued about 400 migrants early this morning from a green wooden vessel off the coast of Aceh.

Journalists later boarded the abandoned boat and confirmed it was the missing vessel.

Chris Lewa, from the Arakan Project, which monitors migrant journeys across the Bay of Bengal, said her group had also confirmed it was the boat.

“Our researchers in Aceh have confirmed it’s the same boat,” she said.

“They were totally exhausted. He (the researcher) talked to two people, very briefly. They said they had been taken out of Thai waters three times; we previously thought they had only been towed out twice by the Thais.

Khairul Nova, a search and rescue official, said that 374 migrants, believed to be from Myanmar, had so far been rescued.

Just after midnight fishermen saved 102 asylum seekers from the sea of the Malacca Strait, including 30 children and 26 women.

On Wednesday morning, another 272 people were brought to shore.

“Many are sick, they told me that some of their friends died from starvation.”

Idrus said local people were providing food and water, and medics were treating the sick.