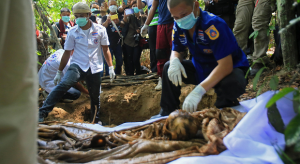 May 26, 2015 – Malaysian police believe at least two of the jungle camps where they have found nearly 140 graves of suspected human trafficking victims were abandoned in the last two to three weeks, around the time that Thailand launched a crackdown on people smugglers.

The first body removed from the site had been dead for around the same amount of time and may have been left unburied as the traffickers fled in a hurry from the area near the Thai border, the local police chief said.

The dense jungles of southern Thailand and northern Malaysia have been a major stop-off point for smugglers bringing people to Southeast Asia by boat from Myanmar, most of them Rohingya Muslims who say they are fleeing persecution, and Bangladesh.

Malaysian authorities said on Monday they had found 139 graves, some containing more than one body, around 28 camps scattered along a 50-km (30 mile) stretch of the border in the northern state of Perlis.

The grisly find follows the discovery of shallow graves on the Thai side of the border at the beginning of May, which helped trigger a regional crisis. The find led to a crackdown on the camps by Thai authorities, after which traffickers abandoned thousands of migrants in overloaded boats in the Bay of Bengal and Andaman Sea.

State news agency Bernama quoted Malaysia’s police chief, Inspector General of Police Khalid Abu Bakar, as saying that the camps were thought to have been occupied since 2013, and two were “only abandoned between two and three weeks ago”.

Khalid told reporters on Monday that police had been “shocked by the cruelty” of the fenced camps, where he said there were signs of torture.

Thousands of Rohingya Muslims are ferried by traffickers through southern Thailand each year, and in recent years it has been common for them to be held in remote camps along the border with Malaysia until a ransom is paid for their freedom.

Past Reuters investigations have shown ransoms demands ranging from US$1,200 to US$1,800, a fortune for impoverished migrants used to living on a dollar or two a day.

On Monday evening, police had removed a badly decomposed body found unburied in a shack at one of the camps.

“The victim could have died and the syndicate did not have time to bury the body as they were rushing to leave the camp,” Bernama quoted district police chief Rizani Che Ismail as saying.

One of the grave sites was just 100 metres or so from the site where twenty-six bodies were exhumed in Thailand’s Songkhla province in early May, national police chief Khalid said on Monday.

“We don’t know if there is a link between the Thai camps and Malaysia camps,” Phuttichart Ekachan, deputy chief of Thailand’s Provincial Police Region 9, said.

“It is possible that because of the Thai crackdown some of the camps moved and some of them (migrants) then walked over or escaped to the Thai side. It is possible but it isn’t something we have been able to confirm.”

Residents in the town of Wang Kelian, on the Malaysian side of the border, said they were used to seeing migrants in the area.

“They are often starving, not eaten for weeks,” said Abdul Rahman Mahmud, a resident who runs a small hostel. “They eat seeds or leaves or whatever they can find. It’s a real pity and it’s sad to see this.”