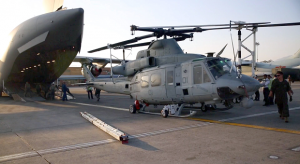 May 14, 2015 – Military helicopters flew over eastern Nepal, and a team sent up a drone on Thursday to search for a missing United States Marines Huey chopper, as the death toll from the 7.3 magnitude earthquake rose to 91 according to Nepal’s home ministry.

The search, involving US, Indian and Nepali military choppers and a battalion of 400 Nepali soldiers, has faced criticism for diverting resources away from relief efforts.

In Koshikhet village, a US civilian team was using a drone to search for the missing Marine Corps UH-1Y, or Huey as the model is better known, which was carrying six Marines and two Nepali soldiers.

“We are using infrared vision to look for hotspots and any signs of life,” said drone operator Shepherd Eaton, from GlobalMedic, a US aid agency that specialises in search and rescue.

So far, no sign has been found of the Huey, which was on an aid mission in Dolakha district near Tibet when it lost contact on Tuesday.

“We are still trying to locate it. There is no evidence to prove that it has crashed,” said Marines spokeswoman Captain Cassandra Gesecki.

Another 2,428 people were injured in the quake, which struck 17 days after a huge earthquake killed more than 8,000 people and damaged or destroyed hundreds of thousands of buildings in the impoverished Himalayan nation.

“The first has done quite some damage. The second has finished the job,” Sermand said by telephone from Kathmandu.

MSF deployed two helicopters, each with two medical teams, to Dolakha to stabilize and evacuate the injured. Civilian helicopters were not asked to join the search for the missing US chopper.

Relief workers and aid were only slowly reaching remote parts of Nepal, where many roads have been made impassable by landslides.

In Mabu village, the Nepali search helicopter stopped to find out if the locals there had any information about the missing helicopter.

“You are the only person we have seen so far,” said Bhagawat Gurung, 18, a villager, when asked whether any aid workers had reached them.

Tuesday’s earthquake, which was followed by several aftershocks, struck just as Nepalis were coming to terms with the devastation wreaked by last month’s 7.8 quake.