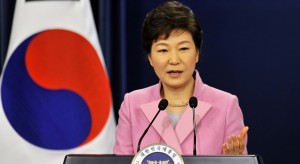 April 13, 2015 – South Korean President Park Geun-Hye will not attend an event in Moscow to mark the end of World War 2 in Europe and instead send an envoy, an official said today, dashing the possibility for a rare summit with the leader of North Korea.

Russia has said the North’s Kim Jong Un would attend the May 9th celebrations marking the 70th anniversary of the war’s end, which would be his first trip overseas since taking power in 2011 after the death of his father.

“The president will not be going,” a South Korean government official said today, speaking on condition of anonymity.

The country’s foreign ministry said over the weekend that a ruling Saenuri Party member of parliament’s foreign affairs committee, who is also a special aide to Park, would attend as her special envoy.

The government official and the foreign ministry did not elaborate on why Park had chosen not to attend.

If Park and Kim were both to travel to Moscow for the event, it would make possible only the third summit between the leaders of the rival Koreas, which remain technically at war under a truce ending their 1950-53 conflict.

Attempts at dialogue between the North and the South are at a stalemate, following the 2010 sinking of a South Korean navy ship and the bombing of an island in the South that Seoul blames on the North. Pyongyang denies any role in the sinking of the naval ship Cheonan.

The first summit in 2000 led to a period of rapidly warming ties after decades of hostility. The second summit was held in 2007 with more promises of exchanges, but relations cooled after a conservative president took office in the South in 2008.