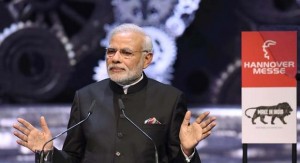 April 14, 2015 – Indian Prime Minister Narendra Modi made a pitch to business leaders in Germany today, hoping to attract more investments in infrastructure projects such as the upgrading of airports and railway stations.

Mr Modi addressed a joint summit meeting of Indo-German business leaders in Hanover, where he also made a strong pitch for investment in his dream project of constructing 50 million houses in India by 2022. Additionally, he outlined the Indian government’s plan to upgrade airports and railway stations to improve connectivity.

“We are modernising our railway systems, including signals and railway stations,” said Mr Modi. “Similar focus is on upgrading existing airports and putting up regional airports to enhance connectivity to places of economic and tourist importance.”

Mr Modi and German Chancellor Angel Merkel said it was a historic opportunity for German investors to increase their presence in India. Germany ranks eighth among foreign investor countries in India. About 600 Indo-German firms currently operate in India.

The two leaders toured the India pavilion at the Hannover Messe Trade Fair, which has seen a huge participation by Indian companies.

“Both Indian and German companies can come together to work for the benefit of humankind,” said Mr Modi. “Together, they can innovate; technology must be made affordable and be put to use to change the quality of life of the common man.”

Mr Modi arrived in Berlin on Monday afternoon and toured the Siemen’s facility. During his visit in France and Germany, the Indian Prime Minister expressed his admiration for European design and innovation capabilities.

Mr Modi, in his interaction with business and political leaders in Germany and France, has emphasised that his government is investing in innovation and research and development.  He has also been making a constant pitch to make India a manufacturing hub and inviting foreign direct investment into that pet project.

The Prime Minister heads to Canada later today from Germany. It will be the final leg of Mr Modi’s three-nation tour.