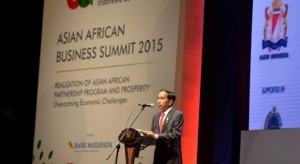 Thirty world leaders and diplomats from 92 countries streamed into the Jakarta Convention Center early this morning. The once-in-a-decade conclave is one of the largest gatherings of nations and represents three quarters of the world’s population.

As host, President Widodo opened the sixth such meeting of the Cold War-era Non-Aligned Movement. He noted injustices and imbalances in the global economic order, saying 20 per cent of the world’s population consumes 70 per cent of its resources.

Widodo also called for reforms in the global financial architecture to help bring economic stability and equality across Asia and Africa. He said the belief that the World Bank, International Monetary Fund and Asian Development Bank can solve the world’s economic problems is obsolete, and proposed a new international economic order that involved new emerging powers.

The threat of terrorism was a common topic brought up by other leaders.

Iranian President Hassan Rouhani called on leaders to identify the reasons why youths are attracted to radicalism.

Japanese Prime Minister Shinzo Abe said the use of force by the mighty over the weak should not go unchecked. “Despicable terrorism is becoming widespread throughout the world. We must give no haven to terrorists anywhere in the world,” said Abe.

The summit will continue tomorrow with bilateral gatherings. President Widodo hosts the leaders at the Presidential Palace for dinner this evening.