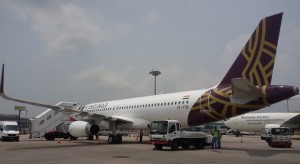 April 10, 2015 – It has not taken Vistara long to set its sights on a new horizon. After just four months of crisscrossing India, the newly inaugurated airline is planning to expand its fleet and touch down on foreign shores.

Exactly how many new planes it will buy is still up in the air, but target destinations are not. Vistara has its eye set on the Gulf, and eventually wants to start flying to Europe and the United States.

Experts say Vistara’s linage – with ties to both Singapore Airlines and Tata-Group – should help with the transition.

A change in aviation regulations could also help carriers like Vistara reach new shores.
Under the current 5/20 rule, Indian airlines have to be operational for 5 years and have 20 aircrafts, before they can start flying abroad.

Last month, however, the government proposed scrapping that rule and replacing it with Domestic Flying Credits, or D-F-Cs. Under that rule, carriers looking to fly abroad would first have to earn at least 200 DFCs by flying within India.

In a bid to beef up domestic routes, carriers will earn more credits by flying to far-fetched locations such as the Andaman Islands. Experts say the change could make it easier for start-ups like Vistara to start flying further sooner.

“Going international gives you wider space and exposure and Indian market, both internationally and domestically, is growing. And because of the nature of the competition, international markets are little more profitable then the domestic operations, ” said aviation expert Harsh Vardhan.

However, it is not going to be an easy climb for Vistara. The fledgling carrier faces stiff competition. Both Air India and Jet Airways have already made inroads into the international market.

On the domestic side, competition from budget airlines has kept fares low and profit margins tight. Vistara is also facing some teething issues. In February, it managed to fill only 58 per cent of seats – far below the 81 per cent average.

Still, the carrier’s CEO Phee Teik Yeoh says the introduction of advanced booking should change that. Vistara will also be rolling out some posh services to entice India’s wealthy – like a new lounge for business travelers. All in a bid to eventual get its piece of the international skies.