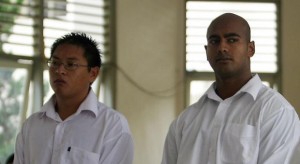 April 9, 2015 – Lawyers for two Australian convicts facing execution for drug trafficking in Indonesia filed a last-ditch legal challenge in the country’s highest court today, in the hope that the president will be forced to reconsider denying them clemency.

Days earlier an administrative court threw out a challenge by Andrew Chan and Myuran Sukumaran, who face imminent execution by firing squad.

The lawyer who filed the review request on Thursday said the constitutional reviews were not intended to directly impede the execution of the pair, but said her team hoped the government would wait until a court verdict was reached.

“We will tell the government, ‘please hold on until this process is done,'” Inneke Kusuma, a member of the pair’s legal team, told reporters, referring to the imminent executions.

The latest legal process could take several months to reach an outcome, she added.

The challenge questions both the law governing the process that the president uses before granting clemency and a separate law that denies foreigners from filing judicial reviews.

Widodo denied clemency to the prisoners, who are among 10 drug convicts due to be executed on the prison island of Nusakambangan. Others in the group include citizens of France, Brazil, the Philippines, Ghana, Nigeria and Indonesia.

“We request that the president at least provide a clear reason why this clemency was rejected,” Kusuma said.

The Constitutional Court is expected to decide within two weeks whether or not it will hear the case.

Earlier this week Indonesia’s Attorney General H.M. Prasetyo said the pair had exhausted their legal options and that the Constitutional Court does not hear cases like the ones filed by the Australian prisoners.