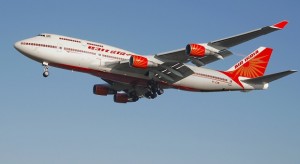 April 6, 2015 – Struggling state-run carrier Air India has grounded two of its pilots after a fight erupted between the pair just before takeoff, reports said earlier today.

The co-pilot allegedly assaulted the captain inside the cockpit as they were preparing the passenger plane for takeoff from the Indian tourist city of Jaipur to New Delhi on Sunday night, the Hindustan Times newspaper said.

The co-pilot was irritated by his superior’s request to write down critical information for the flight, such as the number of passengers on board, take-off weight and fuel uptake, the Times Of India reported.

“The co-pilot took offence at this and reportedly beat up the captain,” the newspaper said, quoting unnamed sources.

“In the larger interest of the airline the commander decided to go ahead with the flight and flew to Delhi,” the daily added.

The airline denied any violence took place, saying there was only a verbal argument between the pair, according to the Press Trust of India.

“There were only heated exchanges between the commander and co-pilot over some issue. We have already derostered the two pilots pending an enquiry,” an Air India spokesman told the news agency.

Air India — which has not reported an annual profit since 2007 — has been hit by a string of technical glitches and other embarrassing incidents, including staff turning up late for flights.

Many airlines have introduced a rule requiring two crew in the cockpit at all times following the crash of a Germanwings plane last month.

The co-pilot Andreas Lubitz deliberately smashed the plane into the French Alps after locking the captain out of the cockpit, killing all 150 people on board.