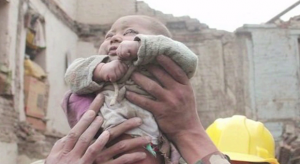 April 30, 2015 – A 4 month old baby boy has been rescued from the rubble of the Nepal earthquake after being buried under a collapsed building for 22 hours, according to a local newspaper.

Images showed the boy covered in dust being pulled to safety by members of the armed forces.

One picture appeared to show the boy, named as Sonit Awal, four months old, buried deep under rubble and bricks.

Rescuers were called after the boy’s family house in the town of Bhaktapur collapsed in the 7.8-magnitude earthquake on Saturday. They tried until midnight to pull him from the rubble without success, the newspaper said.

But the boy’s father continued to hear him cry and the rescue team returned the next morning, eventually pulling him out alive at 10am on Sunday morning. He was taken to Bhaktapur hospital but was cleared of any injuries, the newspaper said.

The condition of the rest of the boy’s family is unknown.

The death toll in Nepal rose to 5,057 on Tuesday as rescue efforts continued. The Nepalese prime minister, Sushil Koirala, warned that as many as 10,000 people could have been killed.