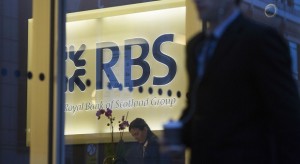 March 6, 2015 – Britain is looking to sell the Royal Bank of Scotland as quickly as possible, Chancellor George Osborne told the Financial Times.

Osborne told the newspaper he hoped to sell the bank “as quickly as we can get rid of it” after the May general election, and that the public “want to see they get their money back” but that it could take years.

RBS is about 80 percent owned by the British government after it stepped in to bail out the bank with £45.5 billion (US$70 billion) of public money in 2008 at the height of the financial crisis, the world’s biggest bank bailout.

Despite major restructuring and thousands of job cuts the bank has since reported losses of almost £50 billion.

RBS announced in February it would hugely reduce its investment banking operations worldwide, and Osborne told the Financial Times he regretted not imposing a radical restructuring on the bank earlier.