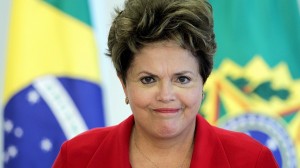 March 9, 2015 – President Dilma Rousseff appealed to Brazilians to back fiscal austerity policies, while saying that the belt-tightening will last as long as needed and results will only start showing at the end of this year.

With the economy stalled and ties with her coalition allies in disarray due to a corruption probe at state-run oil company Petrobras, Rousseff needs support for unpopular steps to reduce a gaping deficit and save Brazil’s investment grade rating on its debt from a downgrade by ratings agencies.

“This is a process that will last as long as necessary to rebalance our economy,” Rousseff said in a nationally televised speech marking International Women’s Day. She said she expected the economy to start recovering at the end of this year.

The leftist leader said belt-tightening started with cutbacks in government spending and moved on to reducing tax breaks and subsidies for credit.

Rousseff’s plans to cut unemployment and pension benefits, however, have met with resistance from within her own Workers’ Party. And a decree to raise payroll taxes paid by businesses was thrown out by her main ally in the Senate last week.

That almost unprecedented congressional maneuver was a sign of how fallout from the multibillion-dollar kickback scandal at Petroleo Brasileiro SA, as Petrobras is formally known, threatens Rousseff’s agenda.

The graft scandal and economic slump have hurt Rousseff’s popularity. During her speech, residents in some neighborhoods of Brazil’s biggest cities booed and banged on pans, calling for her to quit.

Rousseff told Brazilians that temporary sacrifices would be needed to restore the government’s overdrawn accounts.

She blamed a global economic slowdown and a severe drought for Brazil’s current woes. There was no admission of mistakes in the economic policies of her first term that undermined investor confidence and helped push the world’s seventh economy toward recession.

In an attempt to spur investment, Rousseff said her government plans to grant new concessions to build roads, railways, ports and airports this year and enter into new partnerships with the private sector.

Brazil’s Supreme Court announced on Friday it will investigate the heads of both houses of Congress and 32 other sitting politicians, all but one from Rousseff’s governing coalition, for allegedly receiving money from overpriced contracts with Petrobras.

Rousseff made only one reference to the scandal shaking Brazil’s political establishment. She said the “regrettable episode” was the target of a “wide-ranging, independent and rigorous” investigation.